I think this blog is going to be making a come back! Optimistically two times a week...realistically once a week. This is because Drake started daycare this week on Tuesdays and Thursdays. It was a decision that Derrick and I just made last week and everything fell in to place quicker than we expected but I think it's going to be really good for him and very good for me. 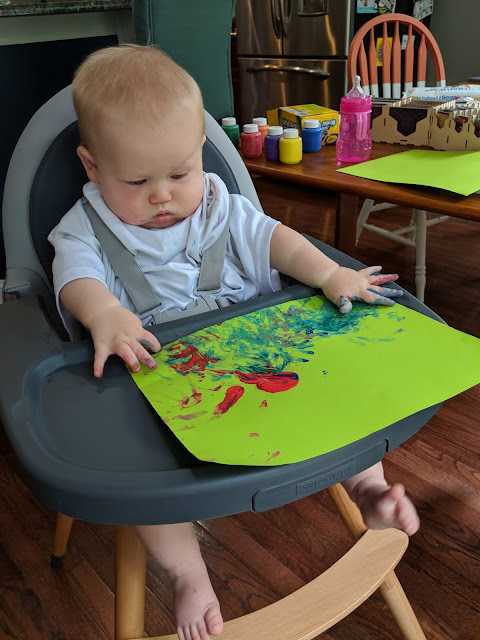 As I've been "cutting back" in my business my listing business has picked way up. It's great and it's work I can more easily do on my own schedule but it means I had a few nights last week where I was with Drake from 6 AM to 5 PM then in the car and at appointments from 5-9:30/10. They were long days and I was tired. Along with that I haven't had a haircut since before Drake was born and I haven't had any personal time in a very long time. It's not at all for Derrick's lack of trying to offer it to me but, with feeding issues and our generally busy lives, it's just how it's worked out. Derrick was the one who suggested daycare and by the end of the night I had talked myself into it. 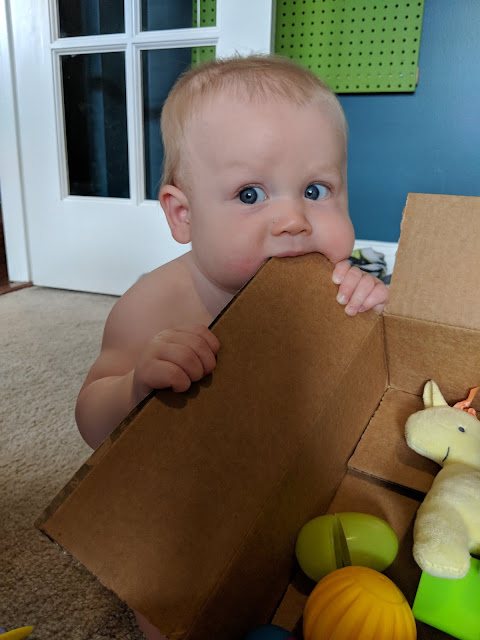 We toured a place last Friday that could get him started mid-July but we both walked away from it not feeling great about it. It has great reviews online and is probably a great option for some but my biggest goal was to find a place where Drake would get some social interaction with kids but still some quality time and attention from the teacher. This place felt a bit like Drake would be lost in the crowd. 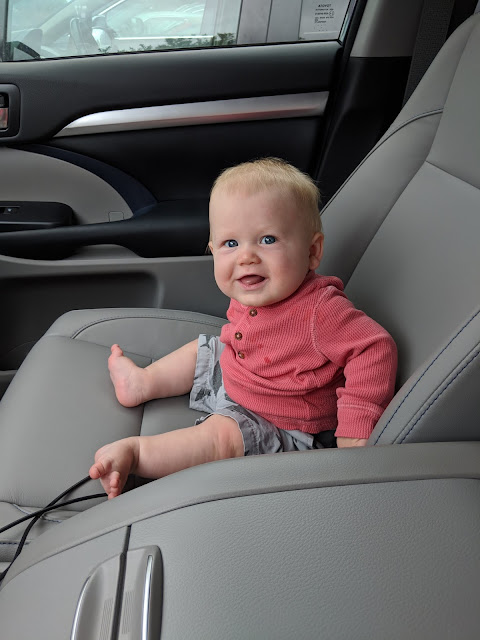 On Monday we toured another one and Derrick and I both walked away with very positive feelings and we had him enrolled by the end of the day. They just happened to have a part-time opening, unusual for the infant room, and we loved the teacher and bright atmosphere of the school. The teacher/kid ratio was right in line with what we wanted and it just felt right. They were able to start him right away and Derrick and I decided it wasn't going to get any easier so we went for it. 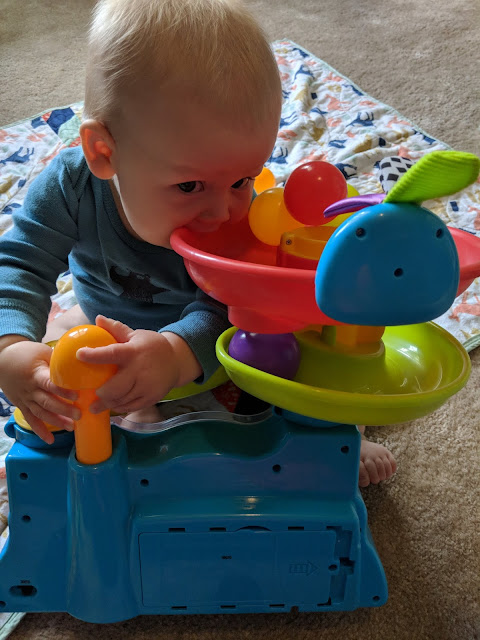 Monday night was hard. I was getting his things together and my anxiety was high. My biggest fear was he was going to feel abandoned. He is very attached to me and I hated the idea of him seeing me walk away and leave him there. Tuesday morning at drop-off was also pretty hard but I think the teacher is used to seeing teary eyed moms and she was great. Even better, Drake got right to playing and there were no tears when I left. I called throughout the day and his teacher said he did great. When Derrick and I picked him up Tuesday afternoon the teacher had Drake and his new friend both on her lap playing away. It was very sweet and confirmed it was the right decision. 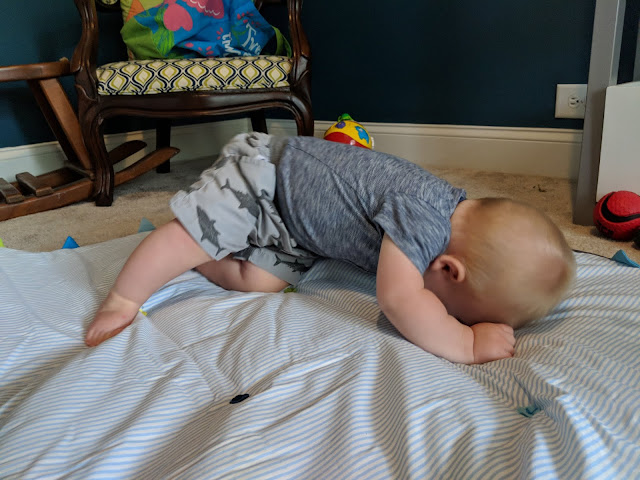 So now, I have two whole days a week to run errands, meet with clients, get work done, and cut my hair! My list was so long on Thursday I still didn't get it done and I imagine that's how it'll look every Tuesday/Thursday. It's amazing how much more efficient I am now that I'm a mom though!

I have a lot to catch up on here on the blog. Drake is trying to crawl, starting solids, sleeping through the night, playing peek-a-boo and just overall doing so well! Hopefully I can get back into a routine here and pick back up with his updates! 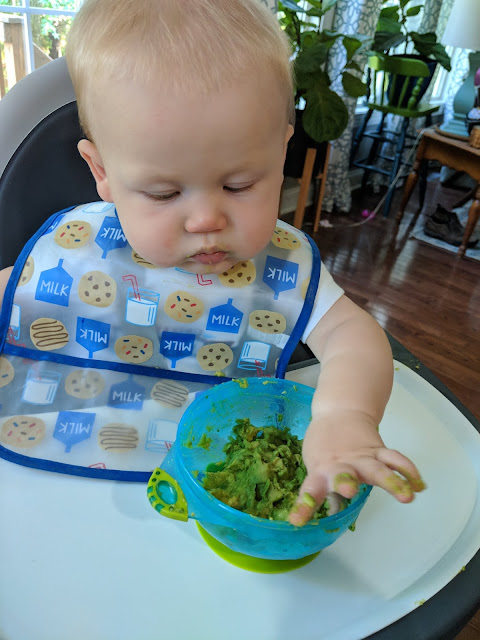 Warning: guest post follows. Read at your own risk.

As today marks the 6th anniversary of Cinco de Marcey, I've decided try to pick a single post which exemplifies / highlights each year of our marriage.

Year 1:
The start of a tradition:
http://marceymadness.blogspot.com/2012/12/christmas-card.html
Who knew how much this would take off? I give Laurie a hard time about this every year, but I guess I'm glad she makes me keep doing it.

Year 2:
Not sure if this falls in year 2 or in year 3, but I'm going to claim it as Year 2.
http://marceymadness.blogspot.com/2014/05/tahoe-anniversary.html
I feel like this trip shaped what our future vacations have been / will be. I don't think either of us knew how much we would love hiking, exploring, getting lost together - we hope that Drake likes it too, because he's going to get dragged into it whether he likes it or not.

Year 3:
The post that launched 1000 ships (or at least 1000 house projects)
http://marceymadness.blogspot.com/2014/09/we-bought-house.html
I don't think that I had the typical home buying process - my 30 under 30 wife put in countless hours (mostly without my knowledge) to track down the perfect home for us. All I had to do was say I was ready and *poof* I was a home owner.

Year 4:
Not a trip, but a truly an experience.
http://marceymadness.blogspot.com/2015/12/call-us-coach.html
Not that we needed any more activities to take up, but once we started coaching these guys, we just couldn't give it up. The time and effort involved is no small feat, but every year we just keep coming back because of how great these young men are.

Year 5:
Lots of fun to be had in this year, but the Hawaii trip was truly amazing.
http://marceymadness.blogspot.com/2017/04/magical-maui.html
Knowing what was coming in Year 6 made the timing of this one all the more important. There is no one else I'd rather hike or kayak or just lounge by the pool with.

Year 6:
This one is pretty easy:
http://marceymadness.blogspot.com/2017/10/introducing-drake-raymond-marcey.html
This guy has truly changed our world for the best and we are so lucky to have him. I'm so proud of the mother that Laurie has become and love every day of our crazy life together.

Thanks to my wonderful, beautiful wife for 6 amazing years. I love you so much and couldn't imagine my life without you.
Posted by Laurie Marcey at 6:10 AM No comments: