We Bought a House!

Yep!! We took the plunge into home ownership! We have been gradually outgrowing our apartment. Near the start of summer I no longer cared as much about the clutter because there just wasn't anywhere better to put things.

Derrick and I had been casually looking at homes on my MLS app but we weren't in any rush to buy. Our lease ends in October and we told ourselves back in June if we saw something that we loved we'd jump on it but that we weren't going to move for just anything. Well, near the end of July we started looking a little more seriously. I say seriously, but since I'm a realtor I could just make appointments to check out houses whenever I wanted so it never felt like we were actually looking for us...it just felt like we were checking out what was out there and having a fun afternoon.

One evening I sent Derrick three houses that I wanted to look at. One of them didn't have any pictures online but I had driven by and liked the neighborhood. The other two had intriguing pictures and were in good areas. We made a date night out of it!  The first one we looked at was it. We looked at the other two but kept comparing it to the first one we had seen. Derrick was the one who initiated making the offer which totally caught me off guard. I was not going into the night thinking we'd be making an offer on a house....but when it's right, it's right :)

I'll post more info about the actual house later but we went under contract for it on July 25 and we closed on it this morning. The movers are getting here tomorrow morning and we'll be sleeping in our new home tomorrow night!! Here are a few pics I've been waiting to share until closing day. You'll see at trend :)

If you ever need boxes, go to Craigslist!! I got this entire carload of boxes and packing paper for $15! It also came with a funny story. The woman I bought them from emailed me later because she had told me they were clean and pet free. She was so sure she had offended me because I had a dog and could not let it go. I had to email her assuring her I wasn't offended by her comment. 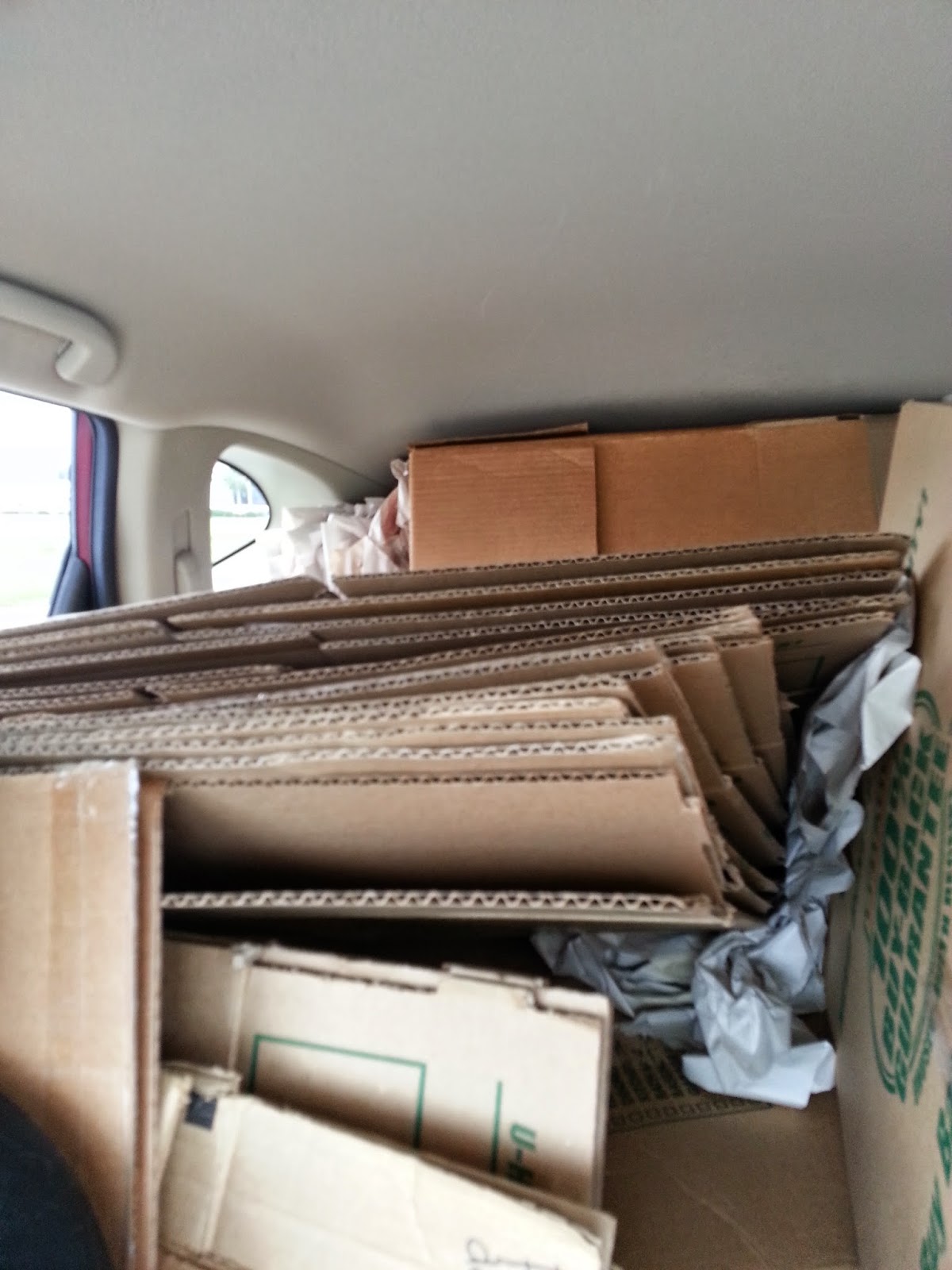 I think we've only had one guest since we went under contract and it was Jack. He had to sleep among the boxes. In our new house we'll have 2 guest rooms which will be totally devoted to guest rooms! No double duty! 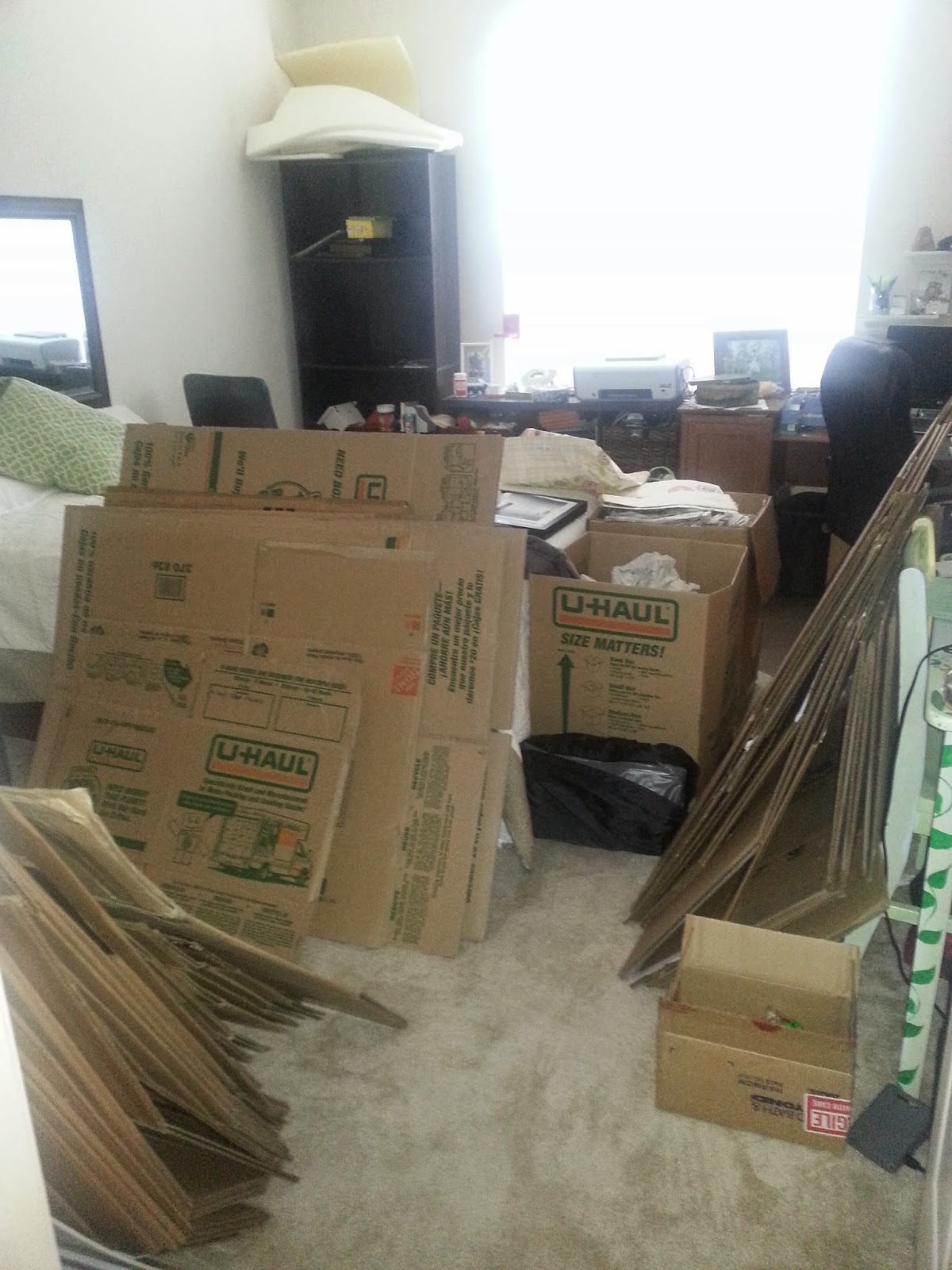 I sent this picture to Kurt on his birthday when we were petsitting Maya. He asked if we were closing the next day....it was a month ago :) I've been eagerly packing since we went under contract. 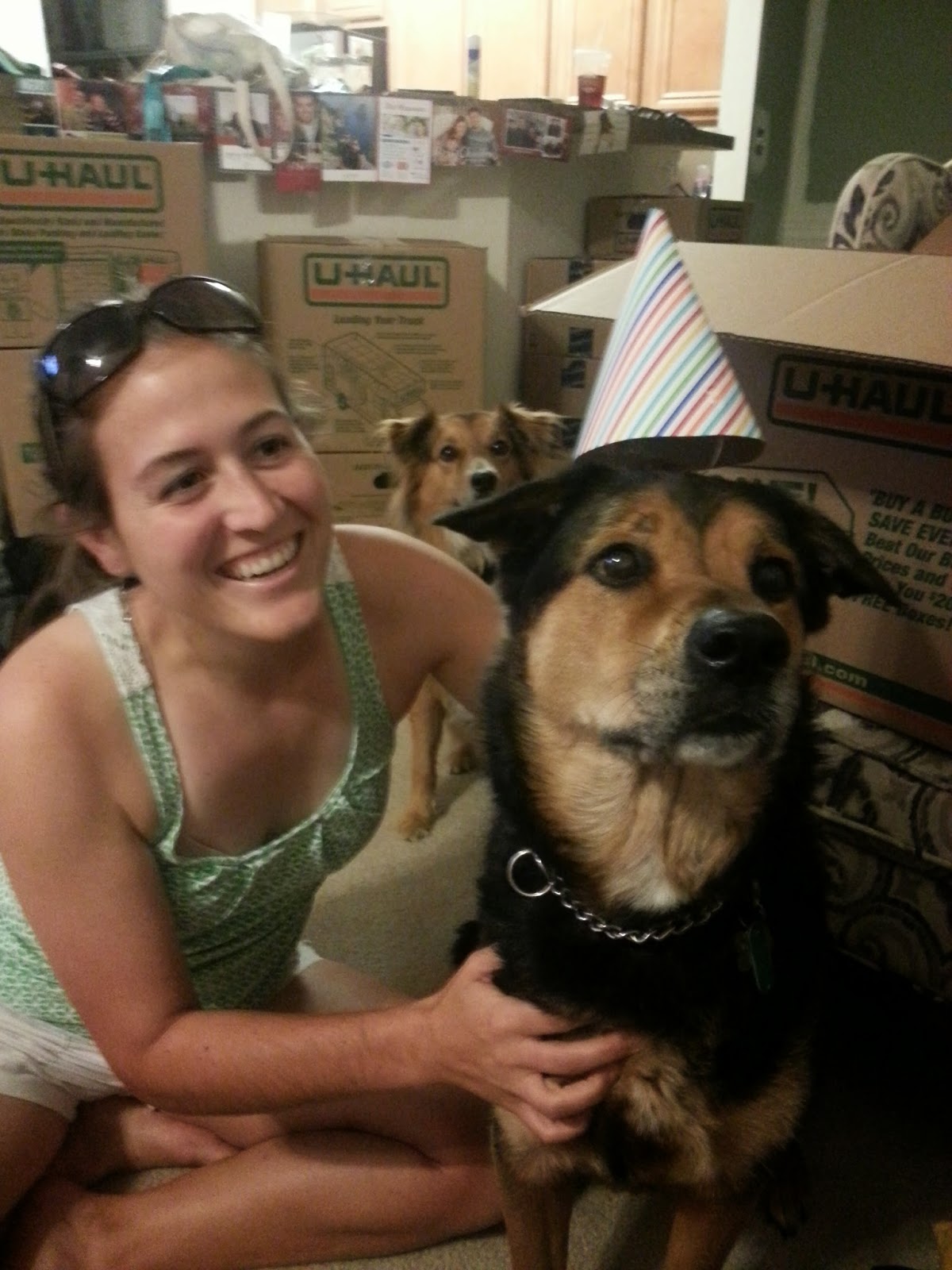 The weekend after we went under contract Derrick and I went to Lowes just to walk around. Here I am with all of the paint supplies we had to buy to paint our dining room in our apartment back to neutral. 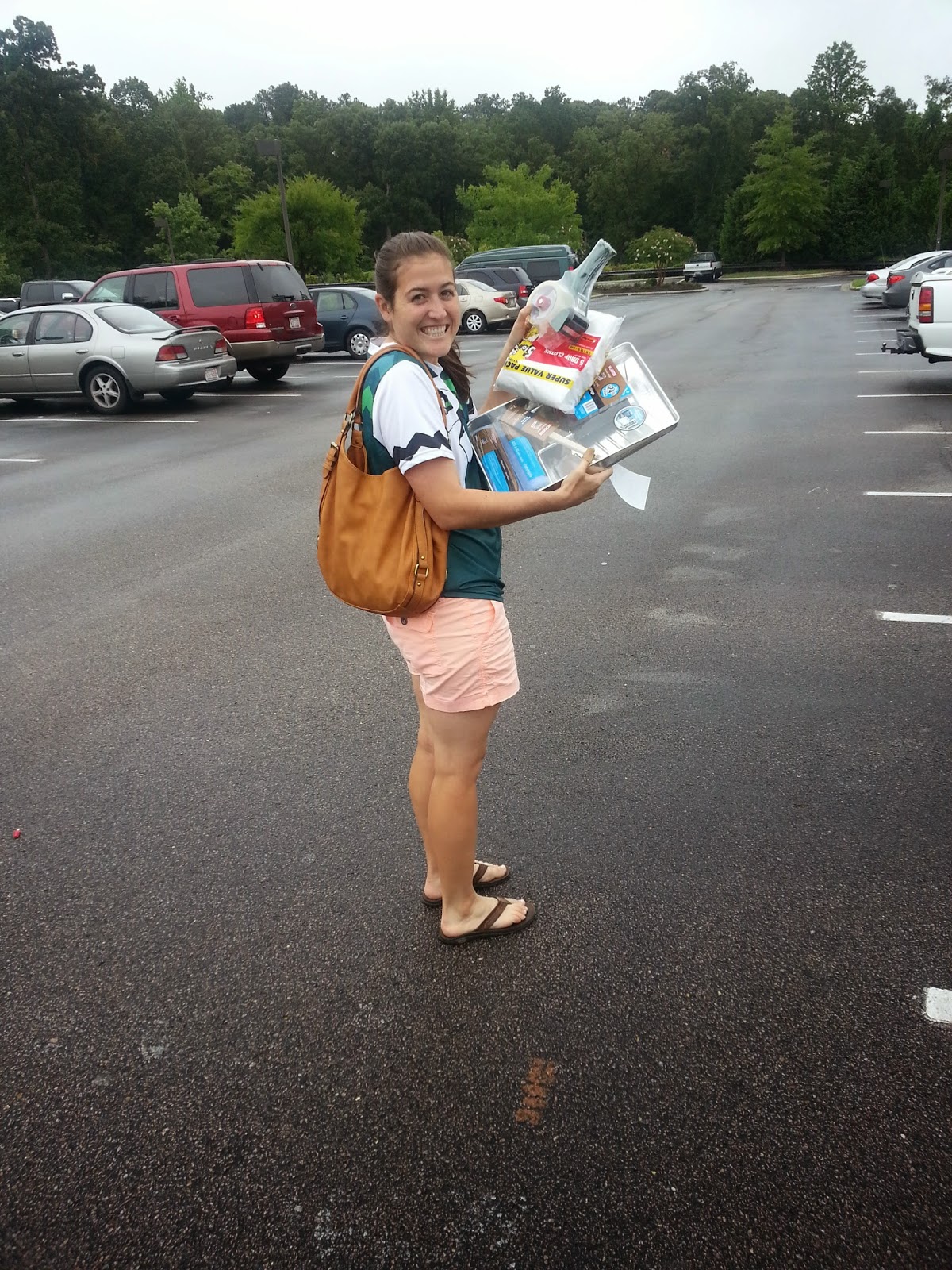 And FINALLY this morning it was closing day!! We had our final walk through, all repairs had been done, the house looked great, and we were closed by 9:30. Derrick went to work while I did last minute packing and we are ready to move in tomorrow! I've already been to the house 5 times today and we are still going back one more time tonight. We had dinner on the floor of our new bonus room and spun circles in our giant new bathroom. Our whole families come into town this weekend to see it! We can't wait!!!! 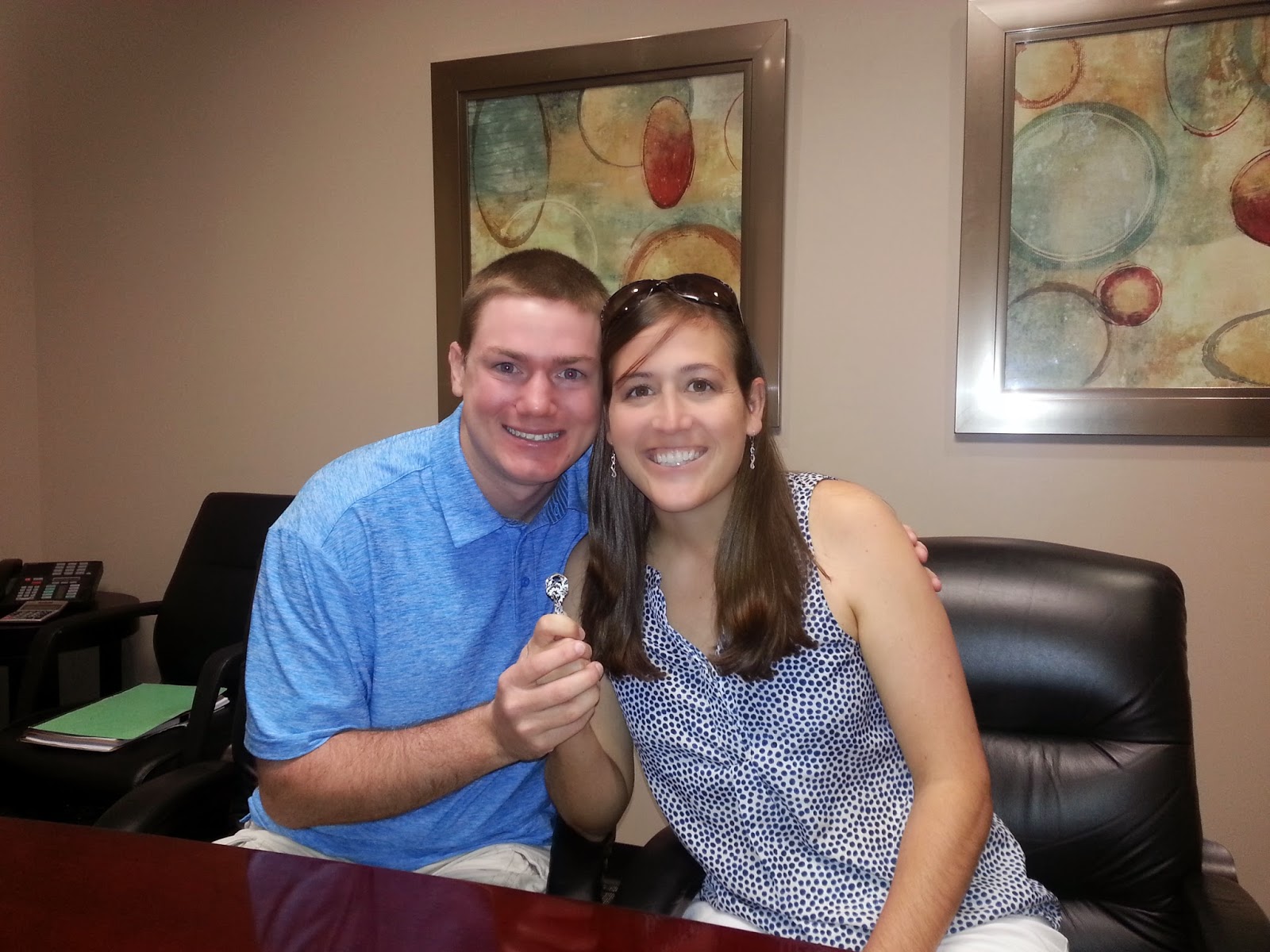 Posted by Laurie Marcey at 5:59 PM