Is 22 weeks right? That seems wild!

Good- The past three nights Drake has slept until 4:30 or later on the first go around! I'm hesitant to even type that in case I jinx it for tonight. Before now he's been consistently waking up around 2:00 or 3:00 and crying it out off and on until we go in after 4:30. I think we've also turned a corner in figuring out his naps, at least the timing of them, so I'm sure that helps. It's so nice to be able to get up just once at night, feed him, then put him back down for a couple hours. 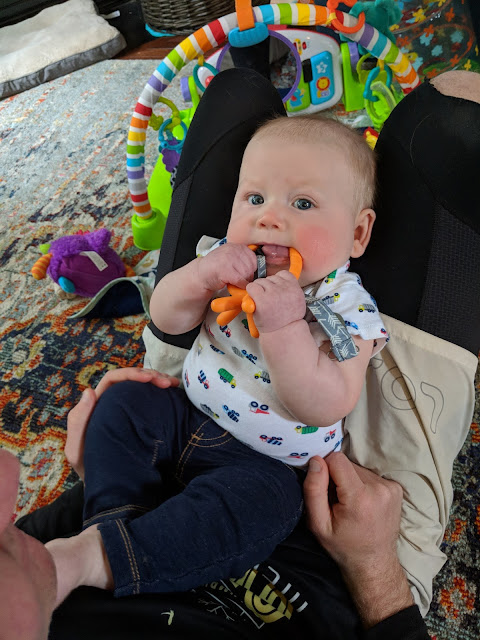 Good- Hugs and kisses. He gives the best greetings to Derrick and I! When Derrick gets home from work we meet him at the garage. As soon as he hears Derricks voice he breaks into a huge grin and always goes straight to him for some hang out time.  If I've been gone for a while or if he has just woken up and Derrick goes up to get him from nap, when he sees me he gets a huge smile on his face then reaches out for my face with a wide open mouth and presses his face to mine. It is the actual best thing ever <3 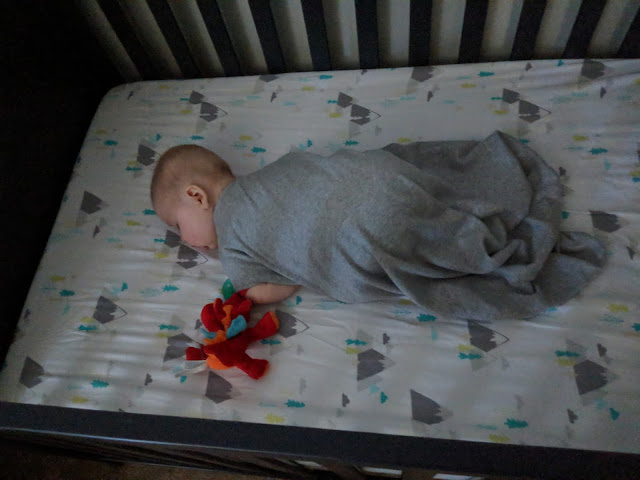 Bad- **fingers crossed we're turning a corner.. I'm writing this an hour and 10 minutes into his current nap so this doesn't apply today **but for the past week he was giving us 15 minute naps. 15 minutes! It was nuts. I think we've figured out that if we keep him up just a little bit longer (about 2 hours at a time) and if I put him down on his side so that he rolls to his belly for nap, he sleeps longer. We're supposed to put him on his back but once he wakes up, about 15 minutes in, and he's on his back he's just up. If he's on his belly he falls asleep hard. I think we can all agree naps are good for everybody so the 15 minute naps were a struggle but I'm feeling better about things now! 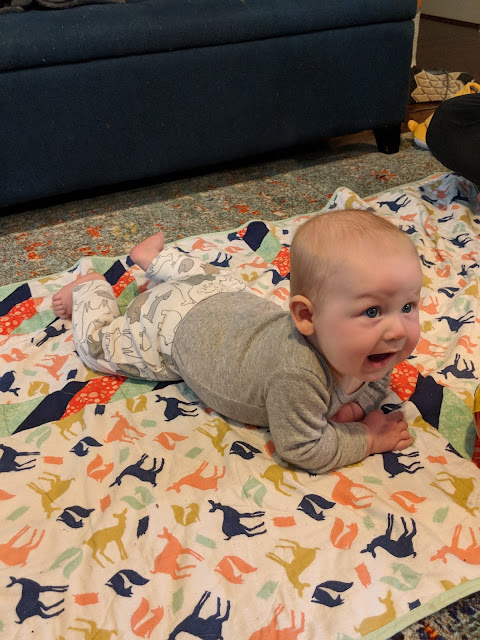 In other random catch-up we've had a lot going on including an away tournament to Charlotte, family in town, a lawn make-over courtesy of Dad and Jay, and some house updates. I want to get back to posting some house updates so I'll try to post about the yard later this week. We're also going to be converting the office to a playroom and the craft room to a office/craft room. I "started" it weeks ago and have made zero progress. If he can consistently do these hour long naps I might actually get somewhere, we shall see! 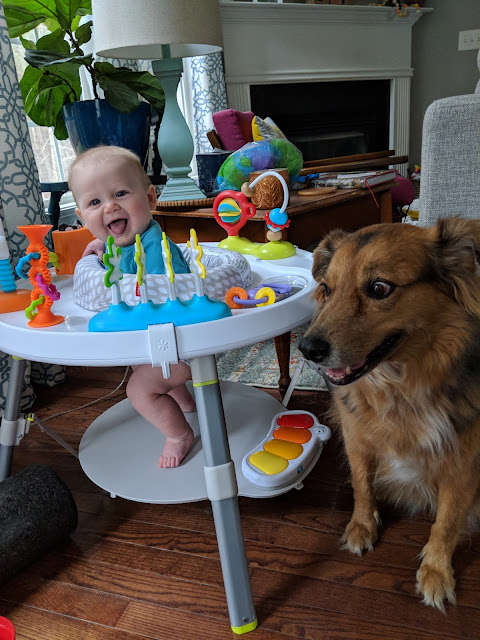 A few more pics, just because I know that's what you're all here for :) 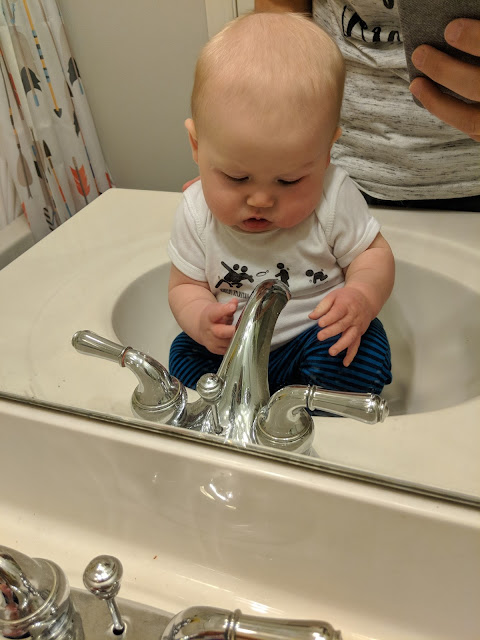 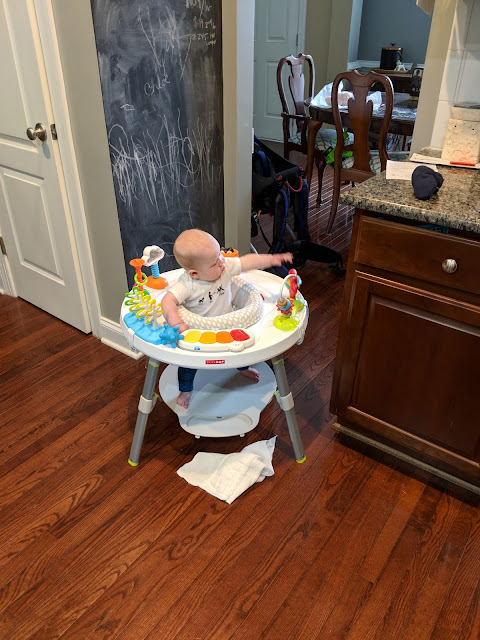 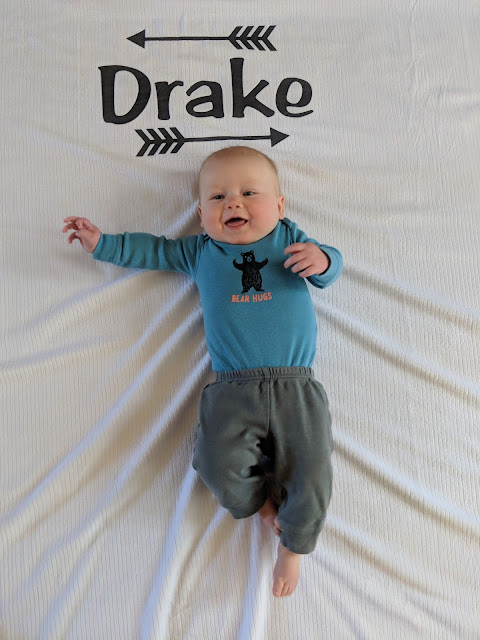 He wants to crawl SO bad! It won't be long. We've already started baby proofing. 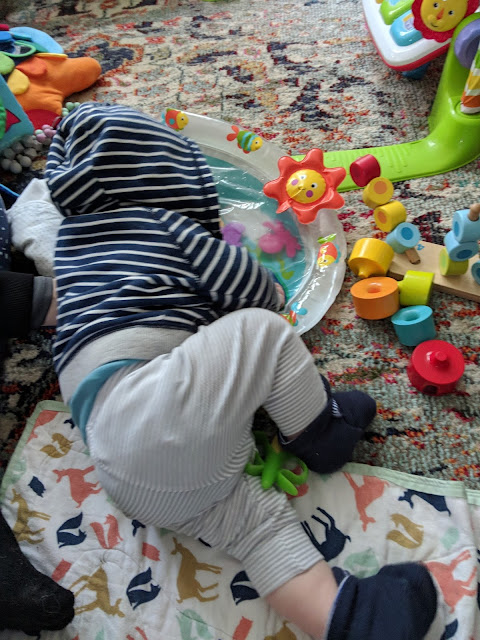 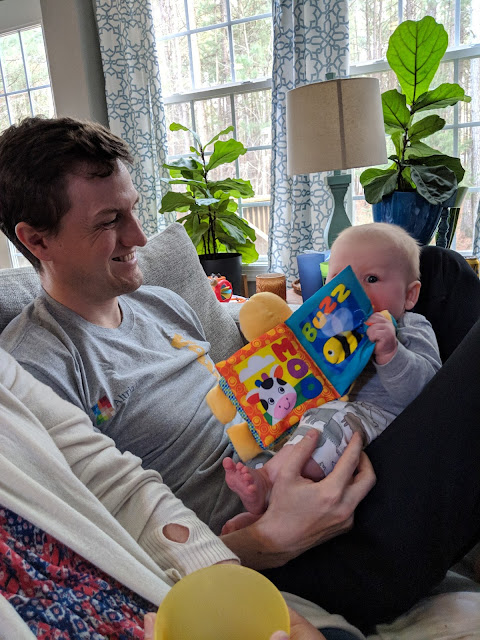 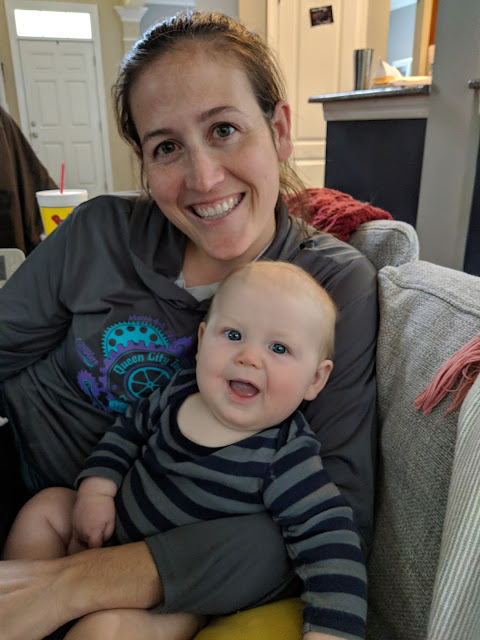 Posted by Laurie Marcey at 11:27 AM No comments:

I started writing this post last Monday, a day after he turned 18 weeks old. Here I am the following Monday still trying to write that post. So this one will cover the past two weeks with our man. We didn't even get a 19 week photo yesterday. 19 weeks in and already dropping the ball. 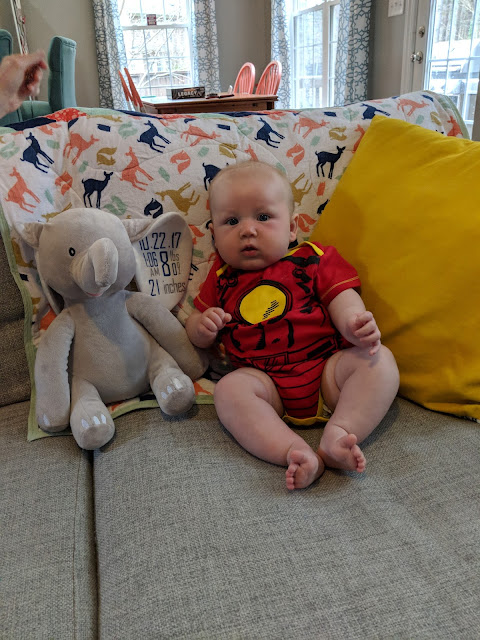 Good: Drake officially moved to his crib last Wednesday and on Thursday night we officially cut out night feedings cold turkey. We had done a little bit of prep for this the weekend before by eliminating the every two hour habit in the middle of the night but we were still doing a 1 AM and 5 AM feeding. We wanted the doctor to give us the go ahead to move him to his crib and let him cry it out and the doctor very bluntly told us "this kid does not need the extra calories." The good is Drake has adjusted like a champ. If he wakes up, he fusses for a few minutes and then puts himself right back out. It still means Derrick and I aren't getting a full night's sleep but we're so proud of him! He goes to bed around 7 PM and we feed him around 6 AM and then put him back down for another two hours. 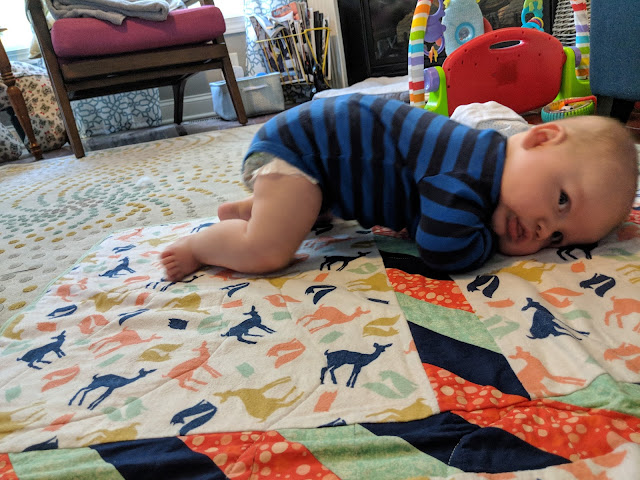 Good Again: Drake is so much more interactive now! He's reaching for everything, laughing and smiling, and he's acting like he wants to get on the move soon! We've already started seeing efforts towards crawling but he still has a very long way to go on that one. 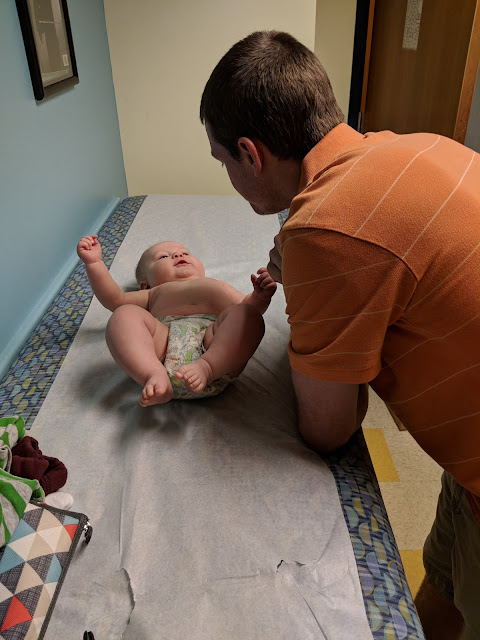 Another Good- We may have solved the bottle issue! More to come in the bad... 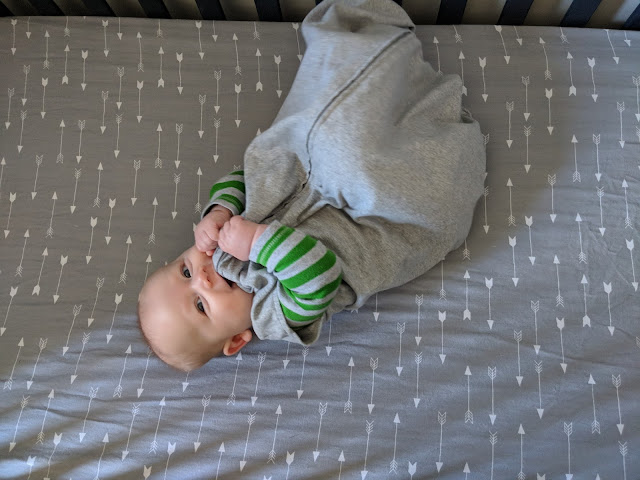 Bad- We decided that we needed to figure out the bottle issue. He was taking them like a champ while I was pumping every other feeding and then just stopped 4 days after we put him back on the right side. We couldn't figure it out and it was making it very stressful if I had evening plans. We decided if he was hungry enough he'd take it so we thawed one out and basically force fed him at bedtime. He was crying and spitting but we tried for 15 minutes trying to convince him it was ok. Finally, I smelled the bottle and it was disgusting! I tasted it too and was gagging! I have never felt so guilty about anything. We were force feeding him this terrible milk...he had sputtered through 2 ounces of it and it still makes me want to cry thinking about it. 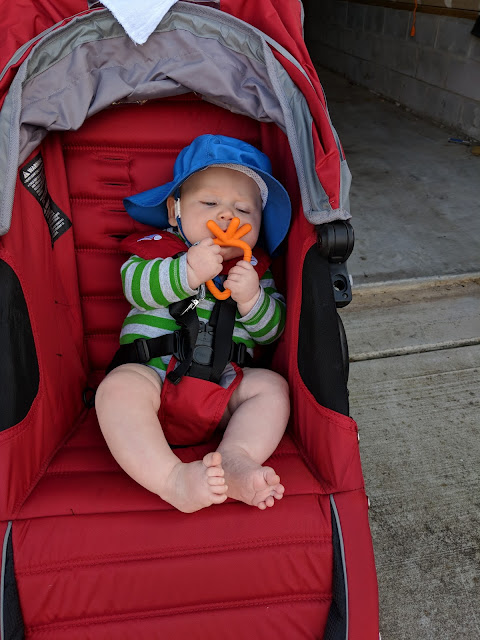 Bad continued- Turns out I have this lipase issue with my milk. Basically I have excess lipase in my milk. Lipase is an enzyme that breaks down the fat in the milk to help babies digest it. When it occurs in excess it breaks down the fat much more quickly and can give the milk a sour taste. Some babies don't mind it but some babies refuse to drink it. It's horrible so I don't blame Drake for being on the refusal end of that spectrum. Fresh milk is OK for a period of time and we can still freeze my milk if we scald it first. We tested it the other night and he guzzled that bottle down the next day. The bad is my stash of frozen milk is now worthless so I have to build that back up and we have to scald anything we want to freeze so it's just an extra step. I'm pumping every night a couple hours after he goes to bed to work my stash back up. I'm glad to know what's going on now but I still feel so guilty about making him drink the bad stuff. 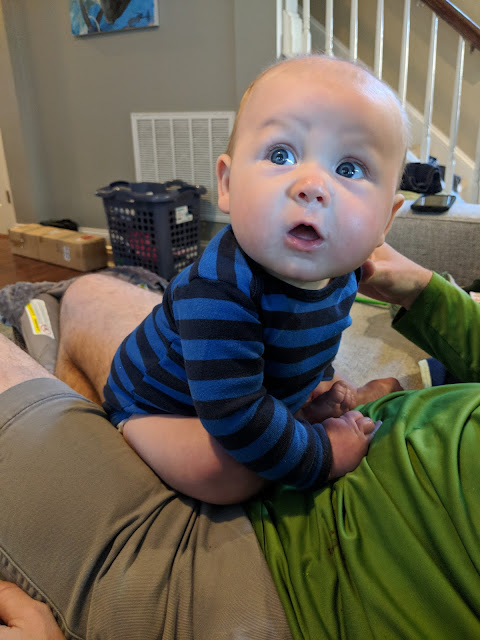 Another bad- Today was so stormy! There was probably 2.5 hours of crying today and I almost lost my mind. We think (and hope!) a tooth is coming through. He's drooly and teething on everything but he was pretty pitiful today. Lots of mad screams but also a lot of sad cries. I'm gearing up for a couple more days of this but we gave him so tylenol at the end of today and I think it helped so I'll give him a dose of that tomorrow morning to hopefully make the day more bearable and make him more comfortable. 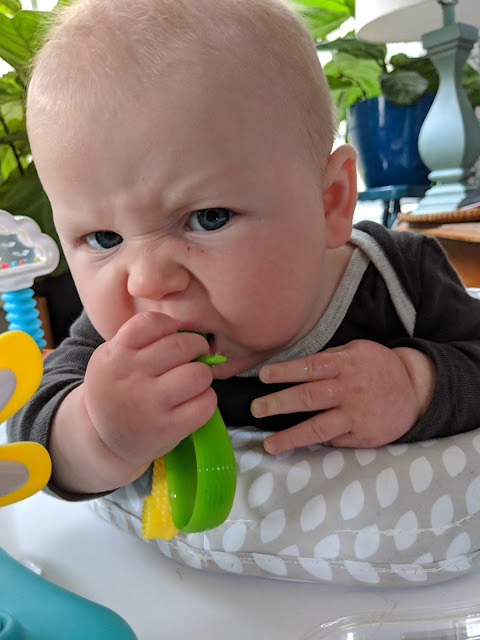 Funny- I took Drake outside during a gorgeous day last week.  I brought out a blanket and some toys and we chilled for a while. I put him on the edge of the blanket to check out the grass and then thought I'd get a cute panned out picture of our day in the sun. This is the picture I got and I laugh every time I look at it. Not as pinterest worthy as I pictured in my mind. 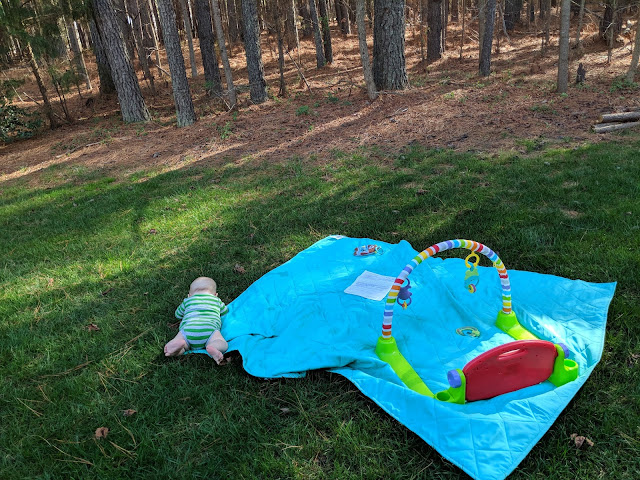 We are so in love with this guy. He greets everybody with a look of judgement and makes you earn those smiles! He studies everything and we can see how much we wants to be on the move. He recognizes Derrick and I and is genuinely happy to see us if we've been gone for a while. He can't help but smile at Crosby and we often use her as a distraction during the fussy times. He uses his whole body to tell you how he's feeling whether it's curling up in a joyful smile, kicking his legs in excitement, or throwing himself backwards in anger. I have a feeling he's going to be a handful and I love it! 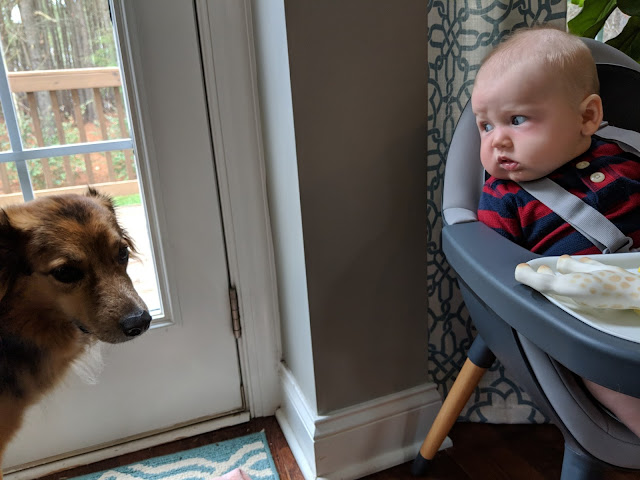 Posted by Laurie Marcey at 6:16 PM No comments: