It's crazy how, even with two of us at home, we can't seem to get anything done! I haven't blogged in over two weeks and I've had the intention of doing it almost every day since my last post. Drake's in a stage where he has a lot more awake time and needs constant interaction while he's awake or, if he's sleeping, he is sleeping in our arms. We're going to work on napping in the crib after Christmas, before Derrick goes back to work, but it just means we don't get a lot done besides Drake and the necessities of keeping the house running.

Derrick has him out running errands right now and he made me promise not to do house work so...blog time! We've been taking turns getting out of the house with Drake so the other person can have some alone time. I'm meeting a friend for a walk this afternoon and Derrick is going to play some pickleball.

We really need to take these in the morning..the evening result in a picture like this. It's actually perfect though because I was thinking the other day how I want to capture his pout on camera...he knows how to turn on the pout face.


About 4 seconds before the pout.


Overall he is doing really well and growing like a weed! According to our home weight checks he's almost 13 pounds and he no longer just looks long and big...he's turning into a major chunk! I thought we would have more time in size one diapers but we're going to get through this box and then size up next time because we've already had a few blow outs.  His most commented on feature are his cheeks. He's storing something in there. 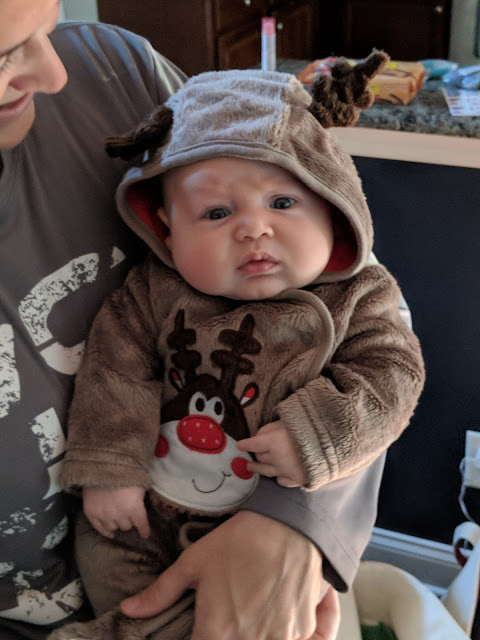 We've got our two month appointment on Thursday and that means shots. I am not looking forward to it at all but we do have some questions for the pediatrician so I'm happy to be going in for a visit. The shots are going to be worse for me than for him, I'm sure. 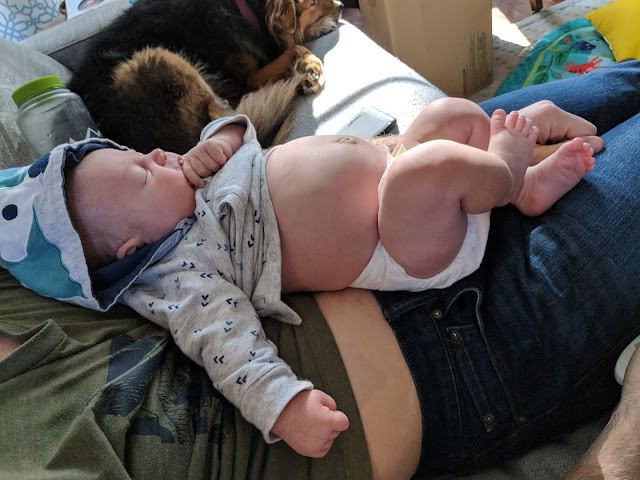 We had a rough couple days right after Thanksgiving on the breast feeding front. We're in a good place now but Derrick and I were both so frustrated and over the whole thing. I was in so much pain and I think Derrick was frustrated hearing me complain and talk about it so much and not being able to do anything about it. It peaked on a Friday night when I was freezing and shivering in bed with so many layers and blankets on. I had a temperature of 101 and a midnight call to the doctor confirmed that I had mastitis on my right side. She told me to breastfeed that side if possible (we'd been pumping because it was so painful) and to alternate motrin and tylenol until they could call in antibiotics. I got antibiotics on Saturday afternoon but by Monday I was still very sore and the lactation consultant was worried I had an abscess so we went into the doctor. Luckily, no abscess, but they talked me through how to get the lumps out and sent us home to work on it. It was still so painful for him to latch that I was basically in tears every time so Derrick and I made the decision to feed off the left and pump off the right for the foreseeable future. The mastitis is gone and I no longer have major anxiety every time it's time to feed. I'm really hoping we can get him back on right side to try again but we don't want to do it too early. I want the cracks to be completely healed so we're starting from square one. It just takes so much planning to have a bottle ready when we're out and about so I'd like the convenience of being able to pop him on but...we'll do what we have to do. Our mental states have been so much better the past week and a half. It's amazing what a thing breast feeding is. I think all new parents have their battles...we got lucky with a relatively chill baby but our battle has been breast feeding. 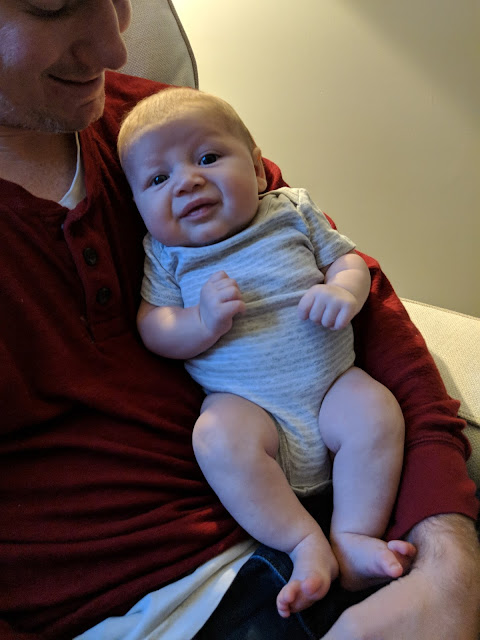 We started family dinners with Jack last week and he got to help with bath time. Drake totally skipped scream hour while Jack was over! I love seeing our families with him. They are all so excited about him and it's the best thing in the world. 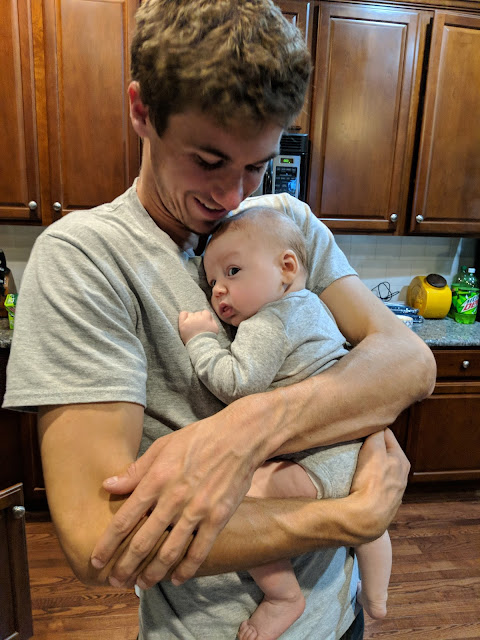 We've been working on a daily routine with him and it seems to be working. We've been more lenient with it during the day and he pretty much sleeps and eats when he wants with Derrick and I keeping a loose eye on the clock but we try to time the last two feedings of the day to coordinate with a bedtime. He was going down at 9 and waking up around 2:30 and we're now trying to bump bedtime up to 8:00. The past couple nights he's gone down on the first try, which has been amazing, and last night he went down on the first try at bedtime and immediately after his 2:00 feeding and his 6 AM feeding. These are the moments I feel like we're actually doing it and getting it right! He still definitely has his moments and, this might just be luck, but it gives us hope! 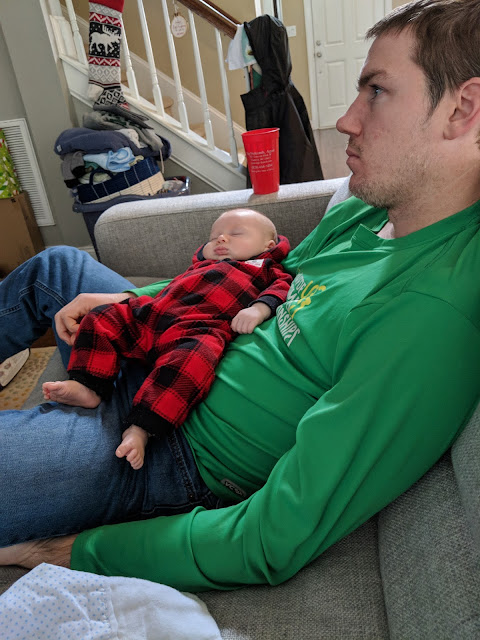 We didn't decorate at all for Christmas but we do have a stocking ready for him and a couple small gifts. He's got a big pile from friends and family all ready...this dude is majorly loved. We're going to be heading back down I-40 for Christmas with stops in Winston and Hickory and then his Nana is coming to Morrisville for a few days after Christmas. 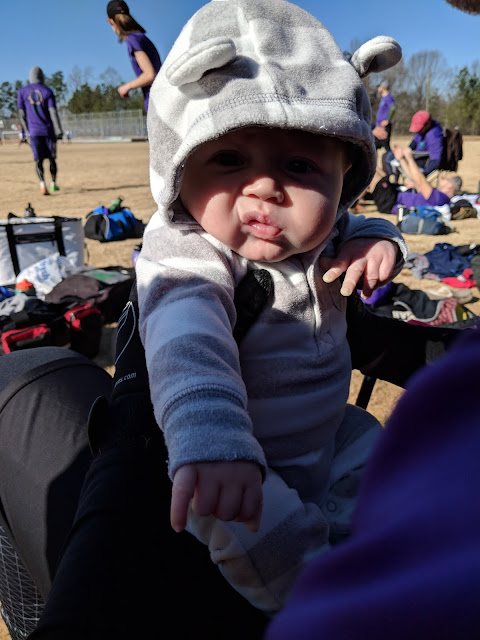 My post-partum check-up went well, besides the mastitis, and I was cleared for all activity. I haven't done a work-out yet but I need to get my butt in gear! Derrick's winter league team had a lady dropped so they are adding me to the roster and I'm signed up for an indoor team starting in January. Drake's already been to two winter league games and has handled it like a champ but this will be our first time with both of us playing and having him on the sidelines. He's going to have to get used to it! He's already been to most of our high school practices and just joined us at a scrimmage yesterday so he's well on his way to being a veteran. 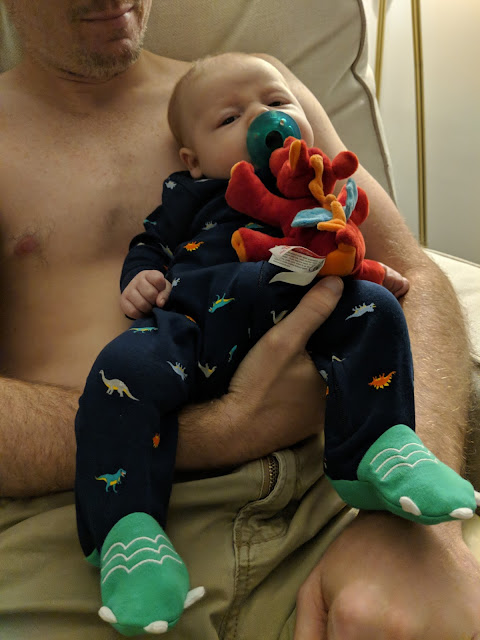 Overall, life is good. My brain still feels a little mushy and I find myself zoning out on people sometimes but I think it's the lack of sleep and the fact that he's still very much a newborn. I've heard things get less foggy around 5 or 6 months so I apologize to anyone I've been a little vacant with! Derrick and I are completely in love with him and it's already hard to imagine life before him. He completely rules the house. This is Drake's world and we're all just living in it.
Posted by Laurie Marcey at 8:52 AM 1 comment: